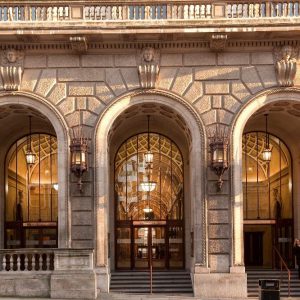 Green Property has sold the Grade II* Listed India Buildings, one of Liverpool’s most iconic properties, to Shelborn Asset Management Limited, on behalf of overseas clients, for £17 million. The transaction represents the largest office investment sale in Liverpool in 2015. India Buildings dominates Liverpool’s traditional office district and occupies an entire city block between Water Street and Brunswick Street, in the heart of Liverpool’s commercial centre.

Constructed between 1924 and 1932, the landmark asset comprises a total of 500,000 sq ft, arranged over ten floors above ground and basement and sub-basement levels. One of the most striking features of the building is the Holts Arcade, a stunning barrel-vaulted retail arcade which runs the length of the building.

India Buildings also has its own entrance to James Street underground station. While Green Property has implemented a substantial asset management programme since acquiring the building in 2009, significant opportunities remain, as well as reversionary income, and there is also potential for conversion to alternative uses, including residential and hotel. The property is currently home to a number of office tenants including DLA Piper, Colliers International and Citizens Advice Bureau, and when fully let the potential Estimated Rental Value for India Buildings is over £5 million per annum.

Mark Worthington said: “We are delighted to have been involved in the sale of this incredible building and look forward to working with the new owners to help restore the building to its natural position as Liverpool’s preeminent office building.”