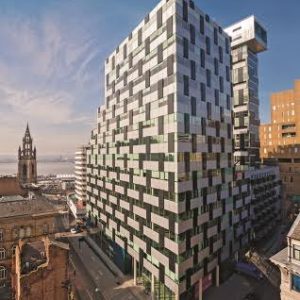 An iconic office building in Liverpool has been sold for nearly £20 million.

Significant investment will be made to reposition the scheme as one of the premier office offerings in Liverpool city centre. The ground floor reception and vacant office accommodation, which accounts for a third of the building, will undergo a comprehensive refurbishment over the summer.

Tom White, director at Canmoor, said: “20 Chapel Street forms a key part of the Liverpool Commercial Business District and we are delighted to have acquired this landmark office. We are committed to breathing new life into the building as well as engaging with the business community to further improve the district.

“Liverpool city centre is a thriving hub of commercial activity, with strong occupier demand driven by business expansion as well as significant residential conversions triggering a flight to quality. The difference in rents between Grade A and B office stock is minimal, but we see this gap increasing as businesses look to upgrade the quality of their premises as supply tightens.”

Andrew Owen, co-founder of Worthington Owen, said: “The recent acquisition of 20 Chapel Street by BAPTL/Canmoor marks a turning point in the history of this building. The new owners have exciting plans to invest in 20 Chapel Street which should return it to its rightful place as one of the best business addresses in the city.

“20 Chapel Street occupies an excellent central location and this, combined with the quality of the office space on offer and stunning river views, marks it out amongst the competition.

“The reducing stock of office accommodation within the city centre is well documented and it is highly likely that the vacant space within 20 Chapel Street and other grade A and equivalent buildings will soon be gone.”

Worthington Owen has been retained as the leasing agent and Savills has been appointed to manage the building.

BAPTL and Canmoor were advised by B8 and the vendor was advised by Worthington Owen.