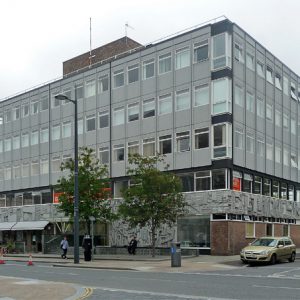 Acting on behalf of Downing, we have completed the sale of Liverpool’s iconic Federation House to the Robert Smith Group for a sum of £2.25M which reflects a capital value of £106 psf or alternatively a net initial yield of 9.2% after allowing for usual purchasers costs.

Andrew Owen of Worthington Owen, said:  “We were delighted at the level of interest generated in this asset and are increasingly seeing investments such as this throughout the city. The Robert Smith Group performed exceptionally well throughout this transaction – completing within eight weeks of the agreement of terms. There is no doubt the future of the building is in safe hands.”

Adjacent to Liverpool’s famous Philharmonic Hall, the front of the building is distinguished by its faux-Aztec cladding which is manufactured from sculpted glass fibre.  The unique design is the work of architect William Mitchell, who also designed the sculpted bell-tower and main doors of the nearby Metropolitan Cathedral.